Random Character Creations are cartoon and comic book characters that I've invented purely out of fun and for my own amusement. This character is dedicated to my brother Andy, who 17 years ago took me to meet Stan Lee at a comic book convention in Fresno, CA. Thanks big bro for one of my happiest childhood memories. 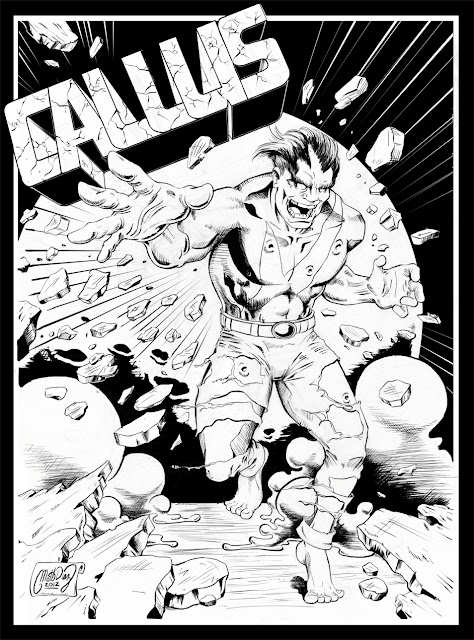 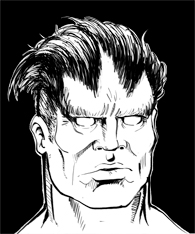 
At the age of 16, Andrew Glenn was rushed to the hospital after his skin spontaneously began to hemorrhage and burn. Doctors were perplexed by his condition and in order to save his life, performed a range of highly controversial treatments on his body. Unfortunately, nothing could be done to save young Andrew, and he was soon laid to rest in a nearby cemetery. Months later, as a result of both his treatments and disease, his brain re-awoke, his body re-animated and he re-emerged from the grave in an undead form. Instead of withering away after death, his body mass and strength had increased tremendously. His skin had transformed into a thick, impenetrable surface, capable of deflecting projectiles, slamming into objects at great speeds, and falling from great heights without suffering any damage. His eyesight had completely gone, but he was now able to move around with great ease using pulsations from his skin. Those pulsations emit a high, squeaking sound, unable to be heard by human ears,that bounce back off objects like a built in sonar. He also lacks any memory of his past and only retains a small amount of intelligence. Soon after his emergence from the grave, he was discovered and taken in by the cemetery grounds keeper named Bo Grebert. Bo gave Andrew the nickname of Callus and convinced him to trust in his every word. Now Callus does his bidding, carrying out plans which at times are heroic but at other times, insanely criminal.

Did You Know? The pointed bald spot on Callus's forehead is the result of multiple injections made by doctors into his brain during their effort to save his life.
Posted by Chew Boy

In Black and White